CEDA CPF Discussion: The Union and Constitution (On Zoom) 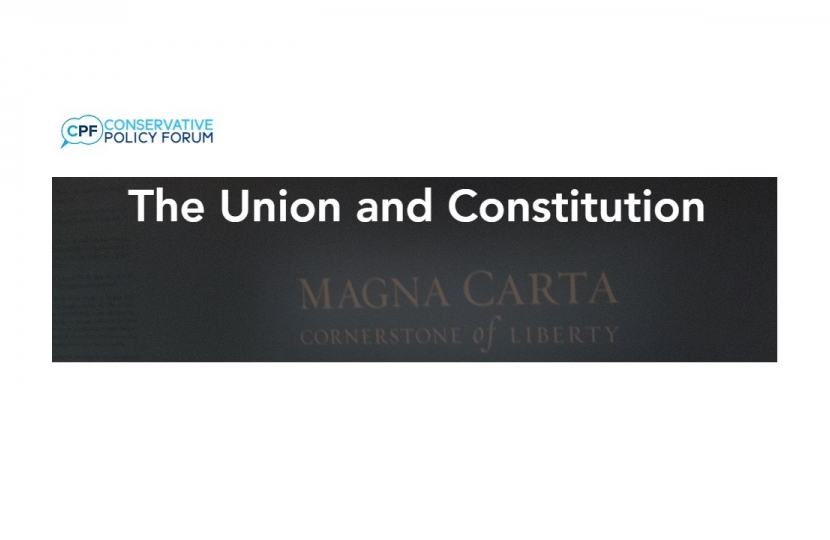 Our local Conservative Policy Forum (CPF) is one of some 150 active CPF groups across the country who meet four or five times a year to discuss the major policy challenges facing Britain and to put our views to the policy makers.

Our reports to Central Office have won awards for originality. We take our role seriously and we are successful in finding answers to some difficult issues of current political policy.

If you would like to join and can make a positive contribution to this debate please email:

On this date the event topic will be:

The Union and Constitution

Background to the discussion

“The United Kingdom is the most successful political and economic union in history. Together, England, Scotland, Wales and Northern Ireland are safer, stronger and more prosperous. For more than 300 years, our people have built this great country together. And we believe our best days lie ahead.”

The current form of devolution in the UK dates back to the late 1990s. Separate legislatures and executives in the four nations have powers to make laws and deliver public services. Recent milestones have included the referendum that decided against Scottish independence in 2014 and the restoration of devolved government in Northern Ireland in January 2020.

Central coordination of the overall relationship between the UK and the devolved nations is supposed to be overseen by the Joint Ministerial Committee. However, some have warned that “Brexit has opened up the Union to a new nationalist and separatist agenda” and have called for the UK Government to work “with devolved administrations and local communities on all matters of import to improving people’s lives.” The UK Government aims to change the perceived culture of “devolve and forget” within Whitehall, for instance by relocating civil servants to and funding projects for councils in the devolved nations.

English local government is divided in some areas into county councils (the upper tier) and district councils (the lower tier). In other areas, unitary authorities carry out all local government functions. Some single-tier councils and district councils are known as borough or city councils, but these honorific titles do not affect the powers available to the council. As of April 2021, there will be 339 local authorities in England, of which 25 are county councils, 188 are district councils and 126 are single-tier authorities. Of the latter, 33 are London boroughs and 36 are metropolitan boroughs. A further tier of around 10,000 parish and town councils exists in some parts of England.

Wales has 22 unitary authorities (also known as county councils or county borough councils), and Scotland has 32 unitary authorities. Both Wales and Scotland also contain community councils, roughly equivalent to parish and town councils in England. As of 2014, Northern Ireland had 11 district councils, but does not have an equivalent to parish and town councils.

England has ten combined authorities, where two or more neighbouring councils coordinate responsibilities and powers over services. Eight of these are mayoral combined authorities, which means that they are led by metro mayors The Greater London Authority is a distinct devolved body led by a mayor but is treated in practice in an equivalent way to the mayoral combined authorities. In addition, there are 38 directly-elected Police and Crime Commissioners (PCCs) in England, including the Mayor of London, plus four in Wales. Devolution deals were also agreed with Cornwall in July 2015 and with West Yorkshire in March 2020.

The Crown Dependencies—namely, the Bailiwick of Jersey, the Bailiwick of Guernsey and the Isle of Man—are not part of the UK but have their own directly-elected legislative assemblies, administrative, fiscal and legal systems and courts of law.viii The UK also retains constitutional links with 14 Overseas Territories, covering a combined area seven times that of the UK and inhabited by around 300,000 citizens. The UK is required “to promote the political, economic, social and educational advancement of the people of the Territories, to ensure their just treatment and their protection against abuses, and to develop self-government and free political institutions.”

“The Fixed-term Parliaments Act caused constitutional chaos [in 2019] which…meant the previous Government couldn’t deliver what it was asked to do. Ultimately, at critical moments for our country, we trust the public to decide. So we are going back to the system that lets elections happen when they are needed. We want to return to constitutional arrangements that give people more confidence in what to expect, and more security.”

“After Brexit we also need to look at the broader aspects of our constitution: the relationship between the Government, Parliament and the courts; the functioning of the Royal Prerogative; the role of the House of Lords; and access to justice for ordinary people… We will set up a Constitution, Democracy & Rights Commission that will examine these issues in depth, and come up with proposals to restore trust in our institutions and in how our democracy operates.”

Recent events showed how the 2011 Fixed-Term Parliaments Act led to paralysis at a time when the country needed decisive action. The over-riding constitutional principle should be that the government of the day has the confidence of the Commons. Fixing the length of a Parliament at precisely five years undermined this democratic necessity and hindered the function of representative democracy by making it harder to have necessary elections.

The Supreme Court is the highest court in the United Kingdom. A legally separate body from the England and Wales courts, it was created in October 2009 to ensure the independence of the judiciary from Parliament. Critics argue that it “has begun to play a role more properly reserved for a constitutional court” although, in truth, for many years “the scope of judicial review has been sharply extended so that many questions that would formerly have been for ministers to decide…are now open to challenge by way of litigation.”

To begin delivering the commission on constitution, democracy and rights, the Government last year set up an Independent Review of Administrative Law and another of the Human Rights Act. The former is considering whether the right balance is being struck between the rights of citizens to challenge executive decisions and the need for effective and efficient government.

The latter is particularly looking at two themes: the relationship between our domestic courts and the European Court of Human Rights in Strasbourg, and the impact of the Human Rights Act 1998 on the relationship between the judiciary, the Executive and the legislature. It will consider whether the Human Rights Act strikes the correct balance between the roles of the courts, the Government and Parliament; and whether the current approach risks domestic courts being unduly drawn into questions of policy. The public call for evidence closes on 3 March 2021 and the review is then due to report back in the summer.

Groups may also wish to respond to the public call for evidence.

The Queen’s Speech set out a variety of measures to strengthen the bonds between the different parts of the UK and to safeguard its constitution and democratic processes:

We very much hope you will join us.

On here you will find interesting events and activities online and offline across the Christchurch & East Dorset area.