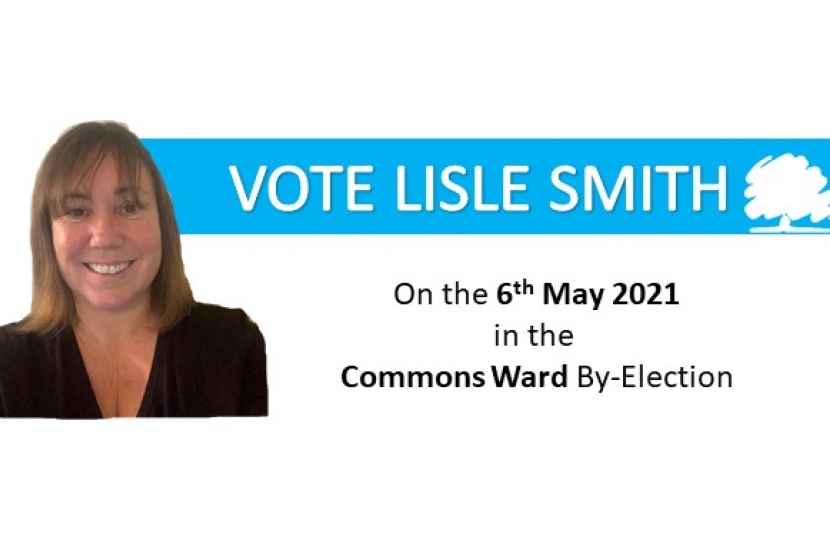 VOTE LISLE SMITH for the BCP Council Commons Ward By-Election on 6th May 2021.

I am very pleased to officially announce today that I am standing as the Conservative candidate for the Commons Ward in the upcoming By-election, for BCP Council ,6th  May 2021.

I’ve lived in Christchurch for 29 years, brought my children up here and lived in Commons ward for 15 years. I know the people and the problems which urgently need solving. As your local candidate in this election; I also want to be the candidate for change, for making a real difference - for standing up and speaking out for the people of Commons ward and Christchurch, my neighbours in the town that I love.

I particularly understand the struggles which young people in our town face, I have two of my own living at home - finding a house, a place to work, finding things to do - I want to work towards solving those problems too. - I’ve been active in local politics for the best part of the last twenty years, a Councillor in Christchurch for ten years.

I love Christchurch; we live in such a beautiful part of the world, and I want to fight to keep it that way. My key priorities in this election will go a long way towards grasping a future for Christchurch which we all know is possible, but so far has been just out of reach.

The prospect of a return to a chaotic coalition of Liberal Democrats, propped up by the 'independent' group, needs to be stopped.  We need an end to wasted taxpayer’s money, an end to vanity projects, and we need local representatives and a Council who will start listening to the people that matter - you!

The only party who will really listen to you and can actually make a difference in our lives is The Conservative Party, who will not compromise on every decision because one of their alliance doesn’t like it   - a vote for any other party will be a vote for a Liberal Democrat led Council.

If I am fortunate enough to be elected as your Commons Councillor in May, then I promise that I will fight for you and for the issues that matter to Commons and Christchurch - because Christchurch matters to me.

If you will be away on polling day, at work or on holiday, are physically unable or just don't have the time to get to a polling station to vote in person, you can still exercise your democratic right to vote. You may have moved house since the electoral register was drawn up and have not yet joined the register at your new address.
You can choose either to vote by post or to appoint someone else - a proxy - to vote on your behalf.
To find out more about voting by post, please visit the Government's official site at: