Her late husband was a soldier and they moved around with each posting, finally settling in his home county of Dorset.

Now retired, she was a library assistant at Ferndown Library for over 20 years, but had to give up her job in order to stand as a candidate for Dorset Council.

She has three children, two step-children and lots of grandchildren. As a former foster carer, she serves on Dorset Council's foster panel. She is also the council's Learning Disability Champion, and Chair of the Local Area Group. She is on the Committee of the Local British Legion and is well known in her community. She loves live music, is an avid reader and very much a family person. 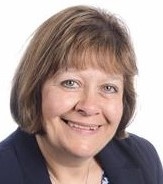